Zofran Lawsuits are being filed against GlaxoSmithKline pharmaceuticals, alleging that the company promoted Zofran for off-label uses, including the treatment of morning sickness. The FDA never approved Zofran for use in pregnant women, and studies have shown that taking Zofran during pregnancy increases the risk of certain birth defects. If you had a child born with serious birth defects and Zofran was taken during pregnancy, contact us today for a free Zofran Lawsuit evaluation.

Contact a Zofran Lawyer today for a free case evaluation.

Our Zofran Lawyers are investigating potential lawsuits against GlaxoSmithKline Pharmaceuticals (GSK) for birth defects caused by the anti-nausea drug Zofran.

Zofran was never tested or approved for use in pregnant women, yet it is often prescribed off-label to treat morning sickness during pregnancy. Recent studies have shown that taking Zofran during pregnancy increases the risk for several types of birth defects:

If you had a child born with one of these birth defects and Zofran was taken during pregnancy, please contact us today about a Zofran Lawsuit. We are offering free case evaluations for Zofran Lawsuits.

GSK was fined $3 billion for these violations, however, patients who were prescribed off label drugs, including mothers who took Zofran during pregnancy, were not compensated as part of the settlement.

Zofran lawsuits allege that GSK promoted Zofran for the treatment of morning sickness, even though it was never approved for this use. In doing so, GSK put countless children at risk of serious birth defects. 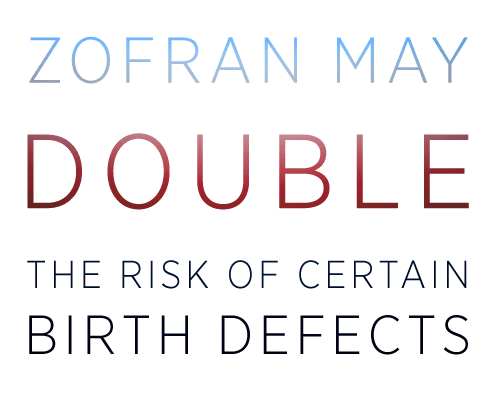 Several studies have shown that taking Zofran during pregnancy may increase the risk of certain types of birth defects including cleft lip, cleft palate, and heart defects.

A 2011 study showed a link between Zofran (ondansetron) and birth defects, specifically cleft lip and cleft palate defects. The study concluded that the findings were significant enough to warrant further investigation.

Another study published in 2013 that reviewed nearly 900,000 births identified that Zofran increased the risk of major congenital heart defects two-fold when taken during pregnancy.

In June 2014, an investigation by the Toronto Star found a higher risk of birth defects among pregnant women who took Zofran or the generic version during pregnancy. The Star uncovered this information after reviewing data from the US Food and Drug Administration’s (FDA) public side-effect report database.

No Cost. No Obligation. We Can Help.

At NastLaw, we are proud to offer free case evaluations for all of our clients. We understand that if you are seeking legal counsel you may be in a difficult financial situation. If you choose NastLaw as your legal counsel, we will never collect any fees unless you are compensated for your loss.

The use of this contact form does not create an attorney-client relationship and is for informational purposes. For more information or to speak directly with an attorney, please contact us at 1-215-923-9300.