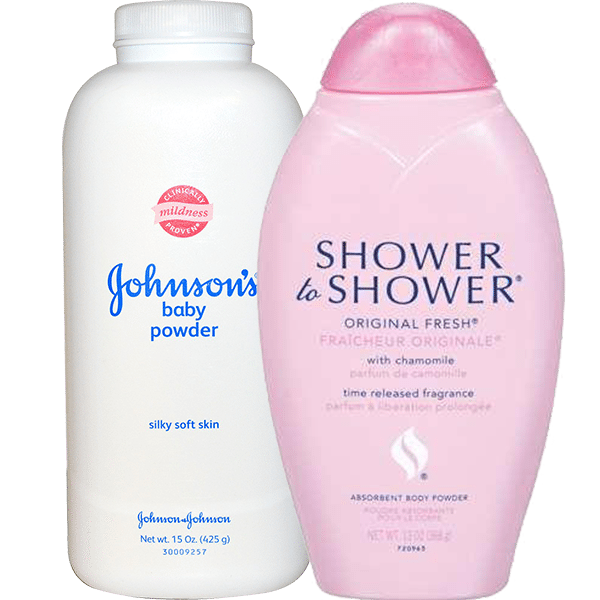 Talk to a Talcum Powder Lawyer

Are you interested in filing a Talcum Powder Lawsuit? Get a free consultation today.

Johnson and Johnson has been ordered to pay over $700 Million in damages for talcum powder ovarian cancer lawsuits.

In August, 2017 she was awarded a record $347 million in punitive damages and 70 million in compensatory damages.

Lois Slemp, of Virginia, had filed a lawsuit against J&J alleging she developed ovarian cancer in 2012 after using the company’s Baby Powder and Shower to Shower products daily for 40 years.

Deborah Giannecchini of Modesto, California had used Johnson & Johnson Baby Powder for over 40 years before she was diagnosed with stage 4 ovarian cancer.

After doctors discovered talc in her ovaries, she filed a lawsuit against Johnson & Johnson.

In October 2016, a St. Louis jury awarded $67.5 million in punitive damages and over $2.5 million in compensatory damages to Giannecchini.

Gloria Ristesund, from South Dakota, has filed a lawsuit against Johnson & Johnson, after she was diagnosed with ovarian cancer after decades of use of the company’s talc-containing products.

In may 2016, Missouri state court awarded Ristesund with $5 million in compensatory damages and $50 million in punitive damages. Her cancer is now in remission.

In February, a jury in St. Louis awarded $72 million to the relatives of an Alabama woman who died of ovarian cancer. Damages awarded in the case were $10 million for medical expenses and $62 million in punitive damages.

This was the first case to result in monetary damages against Johnson and Johnson, but thousands of cases are waiting to be filed and many women are just now learning of potential risk of ovarian cancer from talcum powder.

In this case, cancerous tissues were removed from her body and analyzed by three separate doctors. In each analysis, particles of talc were found embedded in the tissue in her ovaries, leading to the conclusion that the talcum powder caused the cancer.

The judge concluded that Johnson and Johnson was negligent for not warning consumers about the potential risks.

“One blockbuster jury award can be written off as a fluke…when you have two, it starts to look like a trend, and a very worrying one for Johnson & Johnson.”Nora Freeman Engstrom, a Stanford University law professor.

Because products containing talc such as Baby Powder and Shower to Shower are classified as cosmetics and body products, the FDA does not require the products to undergo FDA review. These products do not require the same strict labeling that pharmaceutical products have.

The lawsuits argue that Johnson and Johnson have provided no warnings at all about the potential risk of ovarian cancer from their products.

In fact, the marketing campaigns for Baby Powder and Shower to Shower products promoted that the products were safe to use on the entire body. They even directly encourage use in the pelvic region in some statements. A sample of these statements from the Shower to Shower website include:

Many studies have been conducted on the link between talc and ovarian cancer, and many of the results have been mixed. However, many leading authorities in cancer and public health acknowledge that talc can cause ovarian cancer if it is lodged in the ovaries.

The American Cancer Society acknowledges that talc, in baby powder and body powder, could cause ovarian cancer if the powder comes in contact with the genital area and ovaries.

The International Agency for Research on Cancer classifies talc as “possibly carcinogenic to humans” for perineal use.

Our lawyers have helped our clients recover billions of dollars in damages for injuries from dangerous drugs. If we file a talcum powder lawsuit on your behalf, we will attempt to recover compensation for your medical bills, pain, and other expenses as a result of your talcum powder injuries.

If you were diagnosed with ovarian cancer and used talcum powder products for feminine hygiene in the past, you may be eligible to participate in the class action talcum powder lawsuits.

No Cost. No Obligation. We Can Help.

At NastLaw, we are proud to offer free case evaluations for all of our clients. We understand that if you are seeking legal counsel you may be in a difficult financial situation. If you choose NastLaw as your legal counsel, we will never collect any fees unless you are compensated for your loss.